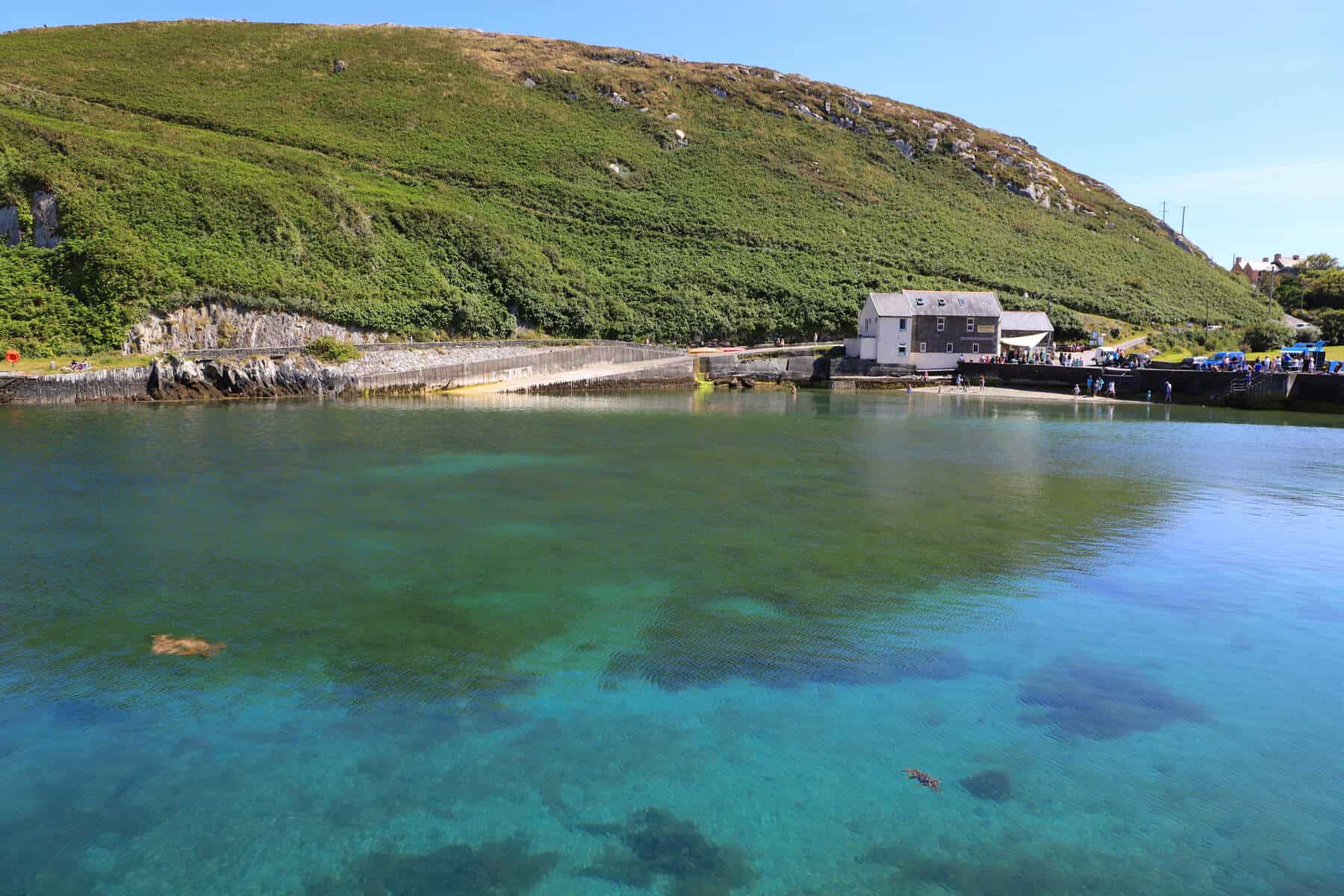 Fabulous islands are in reach, just a short boat ride from the West Cork coastline!

Across Bantry Bay and Roaringwater Bay. you’ll find welcoming island communities, extraordinary stories and gorgeous land and seascapes to explore. So why not take a trip?

Go on, get out there!

Welcome to the West Cork Islands

Seven inhabited islands and a garden paradise are strung like jewels along Ireland’s southwest coastline, just waiting for you to explore!

They’re the perfect places to immerse yourself in the communities, landscapes, seascapes, and heritage of beautiful West Cork. Each island is quite different in character from the next. Heir, Bere, Sherkin, Cape Clear, Whiddy, Dursey, Long, and Garnish islands are shaped by the Atlantic waves and their unique island stories. Each one is a fascinating place to experience Cork’s pure exhilarating beauty and the drama of the Wild Atlantic Way.

Take a walk on the West Cork Islands

Take a stroll along island lanes and across vivid landscapes that introduce you to the tranquility and unspoilt natural beauty of the West Cork islands. Dramatic views across Wild Atlantic bays and back to the mainland are sure to take your breath away! 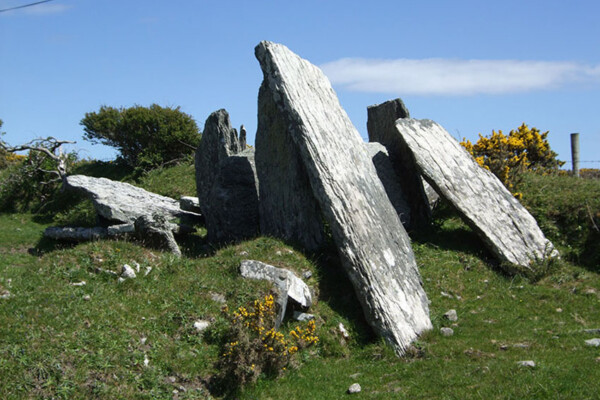 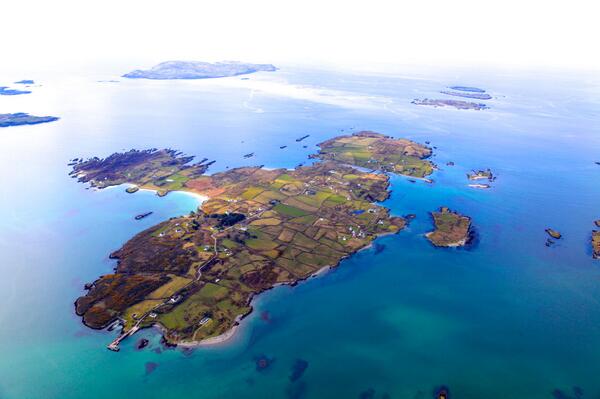 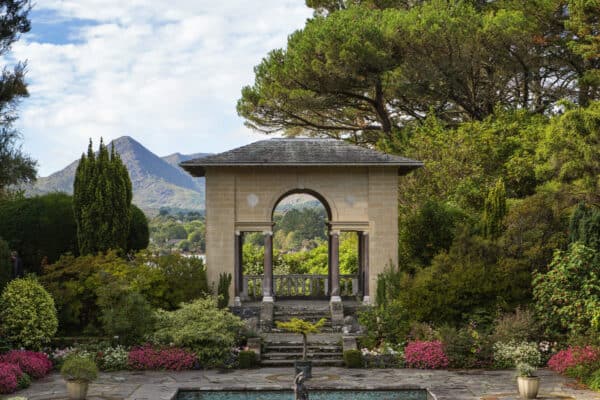 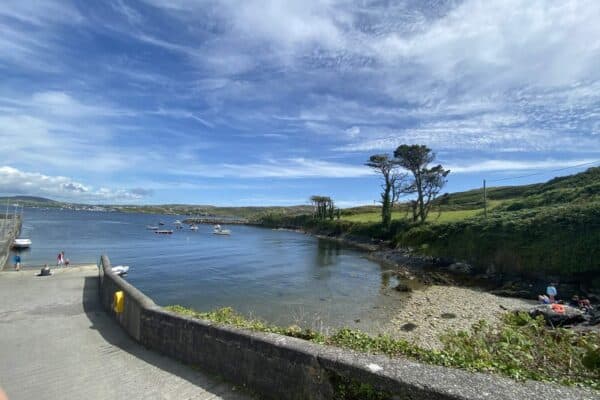 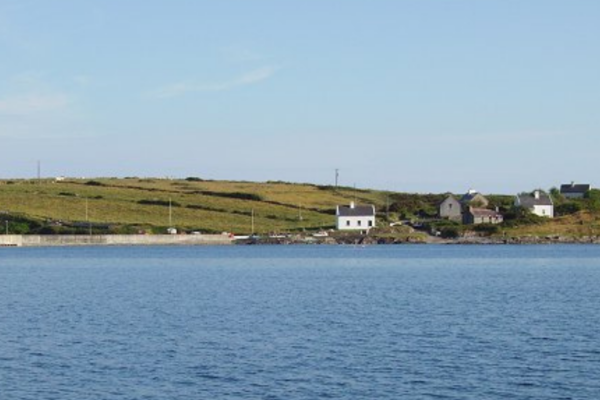 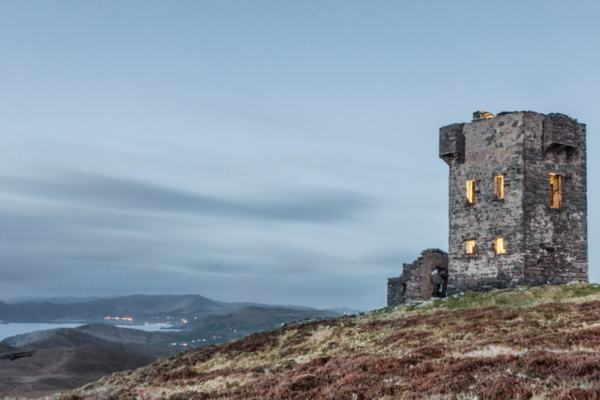 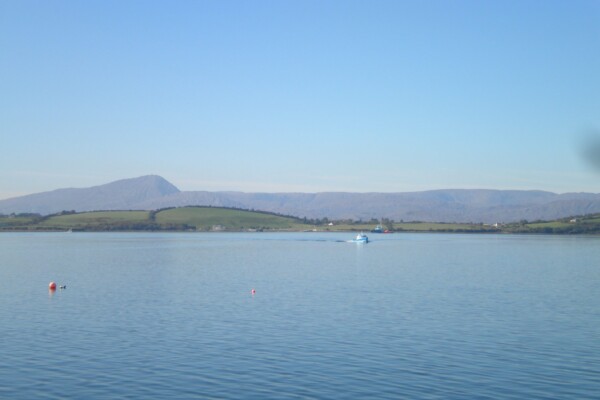 Join us for festivals and events on the West Cork islands!

Find peace on an island retreat or immerse yourself in island life at one of our legendary festivals!

The West Cork islands welcome you to take part in the events we hold throughout the year. From storytelling festivals, art exhibitions, heritage walks, and open-air theatre to parkruns, yoga retreats, and sailing courses, there’s something for everyone across the water. Go on, get out there! 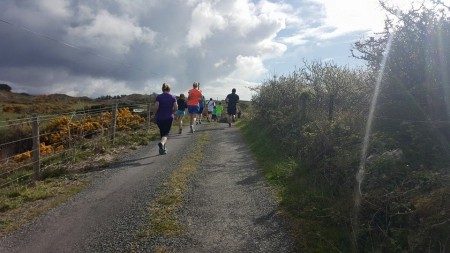 Enjoy a parkrun the Wild Atlantic Way when you join us on Bere Island for our weekly, timed 5k run!

The views across Bantry Bay are spectacular, and the event is suitable for all abilities: walk, jog or run and test yourself against your best time … It’s up to you!

The event takes place at the GAA club Rerrin village, Bere Island, Beara, Co. Cork, and it’s free to enter. To collect your time, you’ll need to be a registered parkrunner, and bring your barcode. You can register online here.

Every week we grab a post parkrun coffee in the Bakehouse cafe, Rerrin village, on the island – please come and join us!

Travel to the Bere Island parkrun

Two ferries run to Bere Island. One runs from the pontoon, just outside Castletownbere, into Rerrin village, just 5 minutes walk from the parkrun startline. It leaves at 8am during June, July and August only. See here for details.

The other leaves Castletownbere for the island’s West End at 9am each Saturday throughout the year. From there, you can join the weekly parkrun bus service. Call Colum on 086 2423140 to book the ferry and bus for a special deal of €10.

To find out more about accommodation available on Bere Island, see http://bereisland.net

Bere Island is a popular destination for runners who join its parkrun every Saturday. In July, there’s a bigger test in story when the Bere Island Midsummer Run draws islanders, mainlanders and tourists alike to the West Cork island which has a rich history and a lively community. 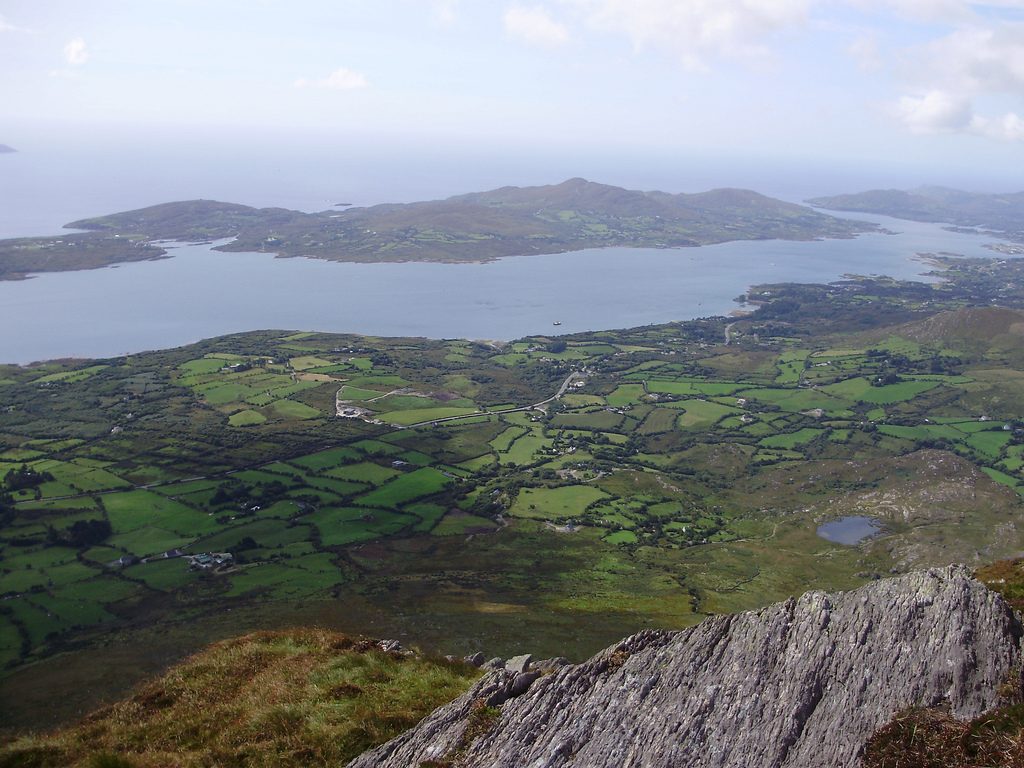 The Active Islands run series returns for 2022 with a series of 5k and 10k events taking place on the West Cork Islands during the summer  for walkers, joggers and runners of all abilities. This is the 4th year of the events and Cork Sports Partnership are delighted to support the local community in hosting these events as part of the Active Islands Sports Hub:

Enjoy spectacular scenery, challenging but enjoyable events and a warm welcome on the Islands this summer.

Tickets are available from EventMaster

Booking Fees will be applied!

There will be after race entertainment for all of our participants. Prizes categories for Male & Female and over 40’s.

Come along and enjoy the weekend and stay on the Island! Please check out www.bereisland.net

Book your place on the starting line! You will need to pre-register to secure your event t-shirt.

How to get there:

Murphy’s Ferry departs the pontoon to Rerrin Village at 11.30am – 5 minute walk to the start line.

Bere Island Ferries departs Castletownbere to West End at 11:30am – 5 mile drive to the start line.

Join us for this special trip to Whiddy Island with West Cork author Sara Baume to hear all about her new novel ‘Seven Steeples’. Sara will be in conversation with fellow West Cork writer Elizabeth Rose Murray.

Sara Baume’s previous work includes novels Spill Simmer Falter Wither and A Line Made by Walking, and her 2020 bestselling non-fiction debut, handiwork. Her writing has won the Davy Byrne’s Short Story Award, the Hennessy New Irish Writing Award, the Rooney Prize, an Irish Book Award and the Geoffrey Faber Memorial Prize, as well as being shortlisted for the Rathbones Folio Prize in 2020 and being nominated for countless others including the Costa and the Dublin Literary Award. She was a participant in the International Writing Program run by the University of Iowa, and has received a Literary Fellowship from the Lannan Foundation. Sara grew up in East Cork and now lives in West Cork. Her new novel Seven Steeples was published by Tramp Press in April 2022. 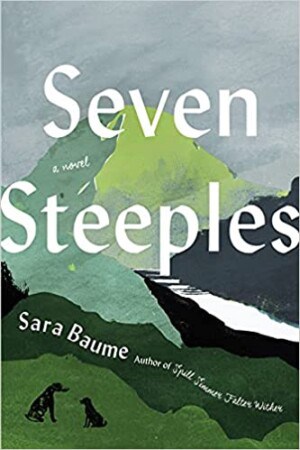 The mountain remained, unclimbed, for the first year that they lived there.

Seven Steeples her third novel is the story of Bell and Sigh, a couple in the infancy of their relationship, who cut themselves off from friends and family. Them in and the world out. From the top of the nearby mountain, they are told, you can see seven standing stones, seven schools, and seven steeples. All you have to do is climb. Taking place in a remote house in the south-west of Ireland, this rich and vivid novel spans seven years and speaks to the times we live in, asking how we may withdraw, how better to live in the natural world, and how the choices made or avoided lead us home.

The ferry will leave Bantry Pier for Whiddy Island at 2.30pm sharp and will depart from Whiddy at 4.45pm. The price of the return ferry is included in the event ticket.

An Afternoon of Music with The Vespertine Quintet – Sherkin Island

Come and join us at Sherkin Northshore for a fabulous afternoon concert with The Vespertine Quintet. Sunday the 10th of July at 4pm.

All proceeds will go towards the community’s fundraising initiative to purchase the old national school.

“Listening to the Vespertine Quintet is like taking a bath in pure sound. Gorgeous, Sensual, Rich Music that uplifts and consoles” Pádraig Ó’Tuama 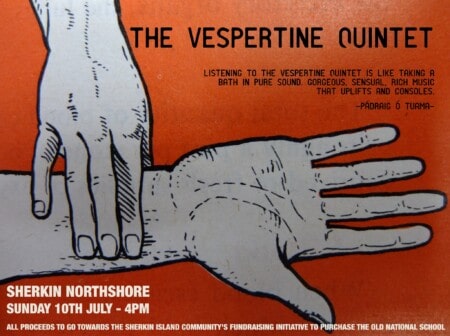 The quintet (which is made up of traditional string quartet and piano, with additional electronics, voices and other quirky instruments) began as a way to get through a particularly dark West Cork winter, hosting house concerts and playing the lush and ethereal music of Icelandic composer Olafur Arnalds and Estonian Arvo Part.
Since then, they have been collaborating with an eclectic range of artists and songwriters such as Adrian Crowley, Liam O Maonlai and Swedish Alto Camilla Griehsel.
Sherkin North Shore is a new centre for island living and island learning being developed on beautiful Sherkin Island off Baltimore in West Cork.
Read more
Categories: Creativity Events Music Sherkin Island What's On
Jul
15
Fri
2022
3-Day Sea Kayaking Safari
Tickets
Jul 15 @ 6:00 pm – Jul 17 @ 3:00 pm 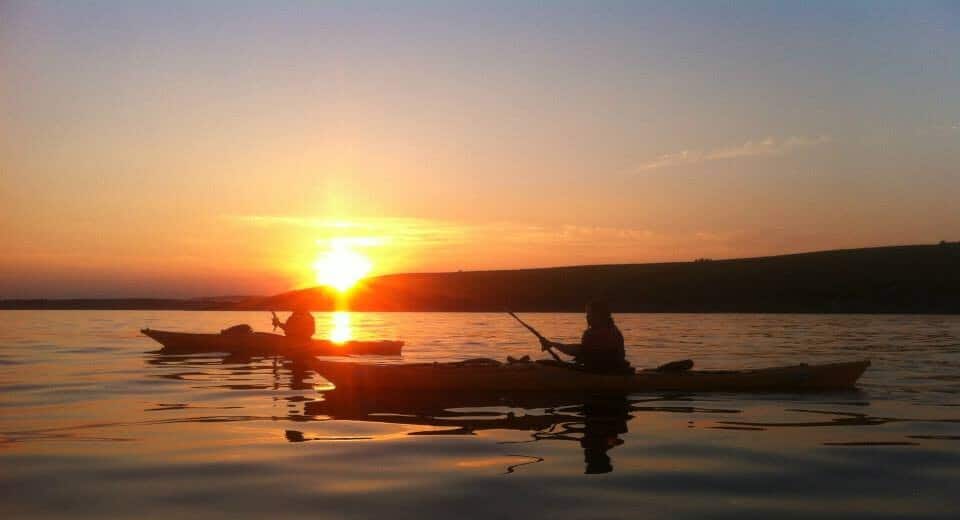 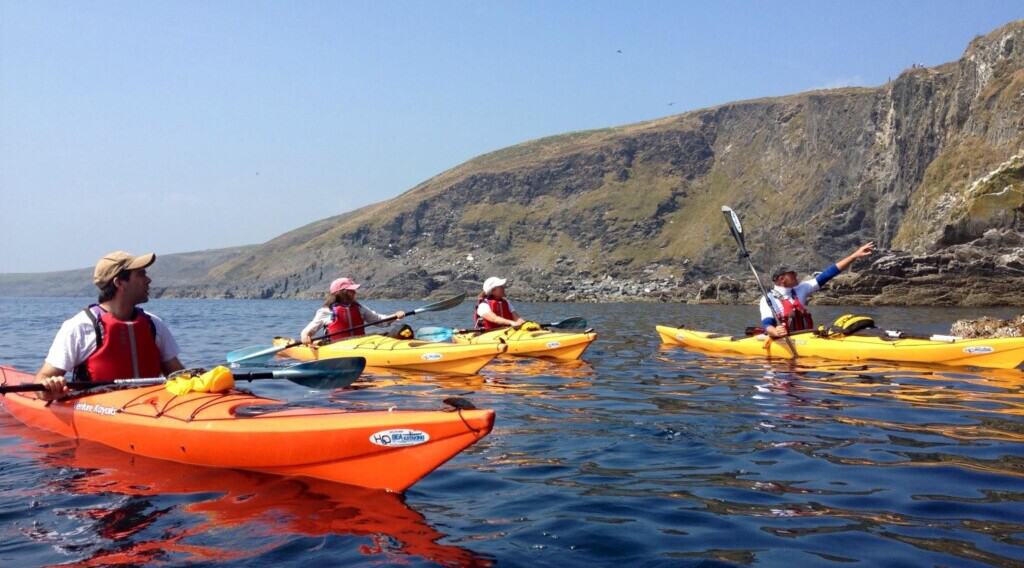 Come to Sherkin Island to experience the peace and tranquillity of island life while at the same time exploring one of Irelands best kept secrets.You will have the time to relax and watch the world go by from the comfort of a kayak and the end of a day’s paddling sit with friends watching the sunset over Roaring Water Bay.

Prices start from €395 per person including accommodation, meals, and equipment.

You will be fully equipped with a kayak to suit your ability level and size along with all the necessary equipment for your adventure. After a safety briefing and basic training, our expert local guides will share their knowledge and love of the sea with you on this exploration of the island.

On the day of arrival after checking in and a good meal, you will paddle at sunset or by moonlight in the sheltered waters of the Cúinne  to get acquainted with your kayak.

The second day will see us explore the islands, deserted beaches and pristine coastline of Sherkin Island and the surrounding area.  We’ll stop for lunch along the way in one of the many sheltered coves or beaches, watching the seals as they watch us!  Your expert local guide will bring you safely to places only accessible by sea kayak, tell you stories of piracy of old and share his knowledge of the wild life in the Bay.

Dawn is often the calmest part of the day so on the last day we’ll rise early to welcome in the day with a gentle paddle before (second!) breakfast.  The rest of the day can be spent wandering the lanes and beaches of the island on foot before heading home that afternoon. 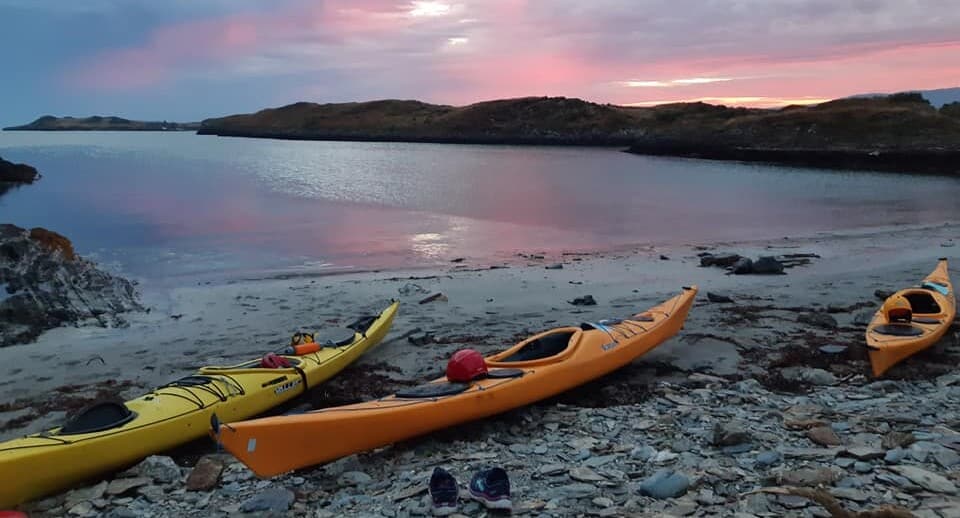 Whether you are an experienced paddler or a first timer we can tailor our tours to suit.

H2O is run by Pat Rodgers, an experienced kayaker and all-around adventurer.

Based on Sherkin Island in the heart of West Cork’s Carberry Isles. 3-day safaris!