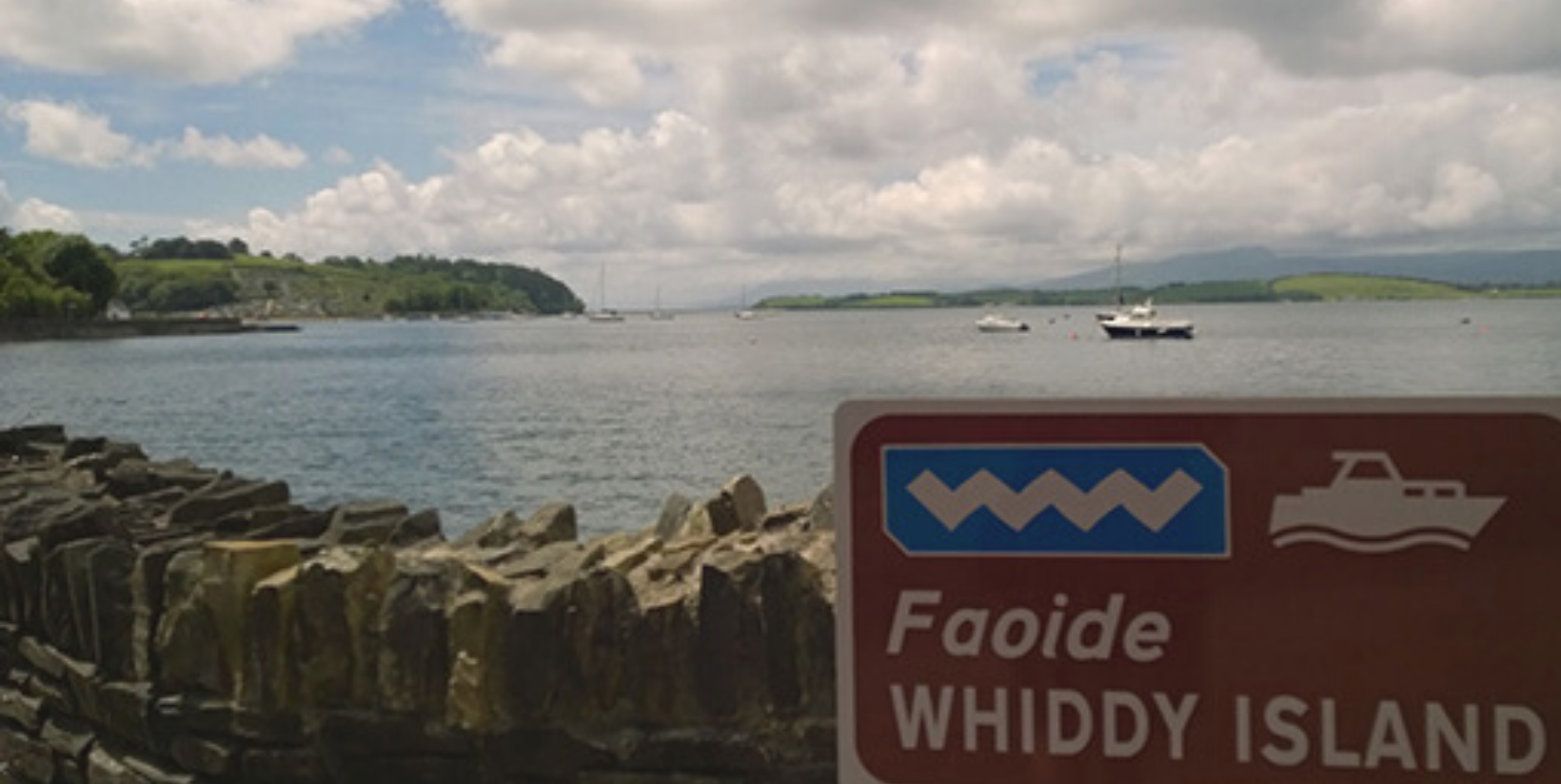 Resting between peninsulas in Bantry Bay, Whiddy Island enjoys a superb strategic position in one of the world’s finest deep-water harbours.

It boasts an intriguing naval history too.

During World War One, seaplanes from a US navy base on Whiddy patrolled Fastnet Rock. More recently, the island has served as a Gulf Oil terminal for berthing supertankers. It was here, in 1979, that the French tanker Betelgeuse exploded in what remains the biggest maritime disaster in Irish history.

Of course, there’s more to Whiddy than modern industry and warfare. At the Kilmore lakes, an early ecclesiastical enclosure features a holy well, church, and graveyard dating from the sixth century. In the early 1500s, the great chieftain Donal Cam O’Sullivan Bere built Reenananig Castle on the island. The castle was bombarded during the Cromwellian Wars, and finally collapsed in a 1920 storm; however three magnificent forts have survived.

Today Whiddy Island is a place where walkers can absorb a landscape steeped in history and – in the summer months – wreathed in red and purple fuchsia. It’s a hideaway where bird-watchers can break out the binoculars; an escape where everyone can grab a well-earned drink at the welcoming island pub. Whether you’re walking, boating, kayaking, or simply relaxing here, you’ll find an island of hidden depths.

1. Make a splash on the Bantry Blueway

Whiddy is part of Ireland’s first Blueway trail, so why not head out onto Bantry Bay to enjoy a host of activities like kayaking, paddleboarding and sailing? On Whiddy Island, and around the bay, you’ll find information boards with trail maps, safety details, and tips on equipment hire and tuition. For more details see here.

The island’s long history is peopled with Vikings and monks as well as Gaelic rulers, and in later times the island was a hub for pilchard fishing and for the military operations of British and American forces. A guided walk with islander Tim O’Leary – who featured in TV3’s acclaimed Islanders series – is a wonderful way to learn the military history of the island and the way that intertwined with the day to day lives of Whiddy’s islanders. Contact Tim O’Leary, Tel. +353 (0)86 862 6734.

A walk on Whiddy Island is a real pleasure. The island is calm and tranquil and the scenery, with views over Bantry Bay, is stunning. The waymarked walk which is part of the Sheep’s Head Way walking route – takes about 3 hours and covers moderate hills, beaches, and roads, so sensible footwear is essential. For more information and to arrange guided group walks, contact Tim O’Leary via whiddyferry.com

4. Hire a bike and explore the island

Bikes are available to hire from The Bank House Bar on Whiddy Island, directly opposite the pontoon. Cycling is a great way to explore the island and take in the great views available on the island, and across the Beara and Sheep’s Head peninsulas.

The West Cork Literary Festival runs a regular week-long workshop on Whiddy as part of its annual July programme, as well as other shorter events. It’s a wonderful place to meet some of the most intriguing authors of our times! And when August rolls around, Whiddy hosts performances as part of the West Cork Fit-Up Theatre Festival.

Find out how to get to Whiddy Island